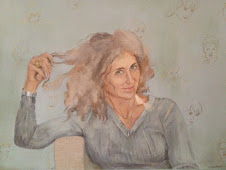 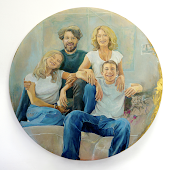 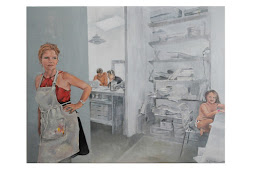 Self Portrait, with Vincent, Luca and Frances, Acrylic on Linen, 60x80cm.

'Portraits from Milan' by Nuala Goodman is truly an extraordinary project, fruit of great skill, constancy and coherence. Nuala has selected her portrait subjects with care; they are men and women with whom she feels affinity, friends and people she admires. All of them are part of her world, the design world. Because they are people she knows, they are susceptible to being portrayed not only in their outward appearance, but also , and especially in their intimate state of mind, in the way they feel. One by one, or in couples, her chosen subjects were photographed, analyzed and then very slowly painted. The process took several years, and progress on the series came about little by little, with Nuala steeped in a mental aura that is the opposite of the hard velocity of a design project.That is why all these figures seem softly veiled, as if wrapped in a faraway and protective space that connects and submerges each of them. It's a textural space that decoratively invades the whole surface of each painting, from the outline of the faces and figures outward, and with different characteristics each time. from these surfaces emerge Nuala's world, her experience, her training in Dublin and her steadfast fidelity to her well-defined poetry and sensitivity, even after her variegated exposure to Milan.

So there is Ireland, and there are affectionate accents of Indian iconography too. And indeed, the Portraits from Milan' exude her contemplation on all these references, and the brushstrokes that generate faces, eyes, lips and skin obediently abide by this precise style as they congregate and converge towards towards the identification of the characters. the result is a series of distinct personal descriptions, that are sometimes delicate and friendly, sometimes a bit harsh or even tough, in which each person is called upon to recognise themselves in an imaginative mixture of seriousness, irony, caricature and hieratic hallucination. In the portraits of couples, perturbing impressions are added to this mèlange. This concludes the cycle of Milanese friends, in which Nuala has invested meticulousness and concentration, much time , affection and isolation. And we, the portrayed , are grateful to her for having chosen us as participants in this very special pictorial saga, at this moment when hand painted canvases are turning out to be the expressive medium of new topical interests.